« Go Back To The Blog Main Menu 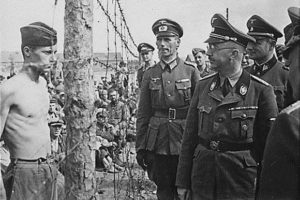 As we celebrate Veterans Day today we wanted to share a story of true grit that encapsulates the sacrifices our Veterans made during WWII and other wars to follow globally. We at Startup HomeCare love that we get to help elderly Veterans and their spouses get up to $2,200 per month to pay for in home care to keep them independent at home instead of moving to a facility. Help us get the word out about these little known VA Benefits!

The above man’s name was Horace Greasley (the one with his shirt off). He was a British POW famous for escaping over 200 times to visit his girlfriend, a local Jewish girl. Why did he keep going back? Loyalty. He returned every time with extra food or other contraband to share with his fellow captives. Greasley spent 5 years as a prisoner of war, during which time he served as camp barber and worked in the marble quarries.

Following capture, the men were forced to march for ten weeks from France to Poland. The men suffered deplorable conditions and spent a winter, in temperatures as low as -40C, lodged in an old horse stable. Those who survived the march and train transfer were beaten, tortured, and starved. Greasley was once beaten so badly he lay unconscious for 2 days. In 2008, his biography, “Do the Birds Still Sing in Hell?” was published. Two years after its release, he died at age 91.

When I see this photo, I always admire the defiance in his face. He refused to be broken. Oh and by the way, the German officer he’s staring down is Heinrich Himmler.

« Go Back To The Blog Main Menu

Find out more about our unique & innovative model

Success in the senior care industry doesn’t need to cost you a third of your profits.

Have a question about StartupHomeCare and prefer to speak to an advisor directly?